Well, what can I say? The ladies in the kitchen have outdone themselves here. No wonder the children swarm into the canteen, queuing endlessly to grab themselves a dish. The aroma alone is enough to draw you in. The meatballs were definitely different from anywhere else I’ve eaten them, a succulent, refreshing change. Next to them, on the plate, was the sweetcorn, unsurprisingly very sweet and very corn-like. I personally love sweetcorn so they have treated me with this one, however, I do feel that it was a bit misplaced in this dish as I don’t think it belongs with meatballs – a nice surprise nonetheless!

The potato met its expectation – fluffy, baked but charred and again misplaced with the overall meal. Perhaps a slice of garlic bread would be a suitable replacement, but that’s just down to personal preference. Despite the misplacements, the side dish perfectly complemented the meatballs, a bowl of curry noodles. Not the most flavoursome but very nice in texture and quantity, a very nice touch to the meal. Definitely a delightful finish to the dish!

Alongside my opinions, I had a few peers, who do not wish to be named, review the food to make my research more representative across a variety of people:

“The meatballs taste nice, I won’t touch the sweetcorn out of personal preference. The potato looks a bit odd but overall a simple, decent dish.” – 3/5

“The sweetcorn is cold, but as sweet as a summer night nevertheless.” –  3/5

“It’s as good as what you’d expect from a school canteen. Really nice and juicy meatballs, filled with beautiful sauce. Yum yum.” – 4/5 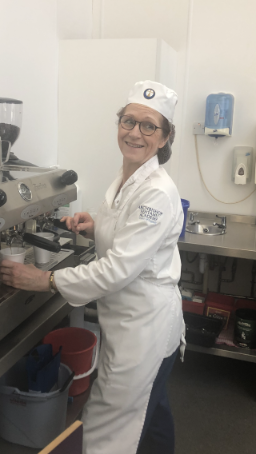 Where is the food sourced?

“Local suppliers. All our fish are fresh off of the dock, the chips are also fresh and blanched when they are landed.”

What’s the variety of food?

“Well, we try to do a varied menu. We look at traditional English meals and incorporate Chinese meals too. We ask the students what they would like but usually they just say chips and things like that.”

Are there any special dishes made for special occasions?

“Not yet. We haven’t been asked recently, but it can be done.”

What makes Archbishop Sentamu Academy’s meals different from the rest?

“Everything is homemade, made from scratch. Everything is fresh, nothing is ever brought in frozen. We make around 40 pizzas, our meat is fresh straight from the butcher. A lot of other schools import their food from catering companies, but we don’t.”