On Thursday 10 March, the 6th form Government and Politics and Law students attended an exclusive online meeting with a member of the United Kingdom Supreme Court. 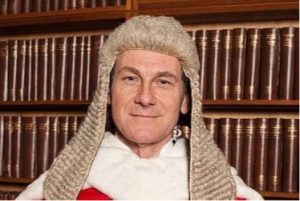 We spoke to Lord Leggatt, QC (Queen’s Counsel, barristers who have been recognised for excellence) who now decides on cases in the highest court of law in the United Kingdom and were able to ask questions based on what they have been studying since September.

Lord Leggatt was educated at Eton College, and studied Philosophy at King’s College, Cambridge, before going on to postgraduate study at Harvard. He practised commercial law for many years and became a judge in 2002. Lord Leggatt then joined the Supreme Court in 2020. The Supreme Court is the final court of appeal in the UK. It was established in 2009 to take over the judicial functions of the House of Lords.

Prior to the meeting, the group devised a number of questions to ask Lord Leggatt. One question was, ‘Would a codified constitution better protect civil rights?’ This question was equally pertinent to Law students looking at the United Kingdom so-called ‘unwritten’ constitution and to Government and Politics students examining the United States written Constitution and Bill of Rights. In response to this question, we discussed the impact of The Human Rights Act (1998) and how that can improve our lifestyles, and how if the constitution became codified it would be harder to change or re-write the Act.

This was a very good experience for Politics students as they were able to hear the things we have been learning about in lessons. Lord Leggatt put the issues into a real-life context and it was very interesting to be able to discover about a real judge’s experiences.

Law student Jake Croser said, “It was both inspiring and useful speaking to Lord Leggatt; having first-hand information from a Supreme Court judge can help in both my Law and Government exams – he told us things even our teachers were surprised at!”

This was an experience that the students involved would never forget and all students thank Miss Jones and Mrs Gittins for organising this once in a lifetime opportunity. 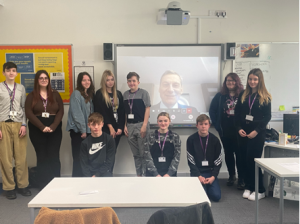 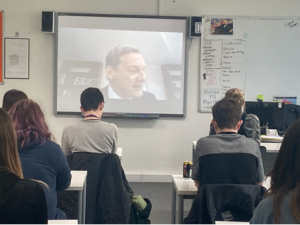