“Get back to the kitchen”: women in sport

Women are perceived in many different ways in the world of sport, ranging from acceptance to complete rejection. The journey of women in sport is one that is long and twisted, dating back to 1848 when women had no rights or freedom to such activities, and subsequently found themselves “tied to the kitchen”. However, due to collective strength or what is believed to be a gender rebellion, women first competed in the Olympics in the 1900s. The first known recorded success of a woman competing was in the 1900 Paris Olympics where Helene de Pourtales became the first female Olympic champion, her team winning the 1-2 ton sailing event.

As the years have passed and the investment within the industry continuously grown, participation in sport among all people has developed and this has been matched by a corresponding increase in the participation of women in sports. However, increased participation is not enough: it is evident that the International Olympic Committee (IOC) has bias against the idea of female-dominated sporting events, proven by the rejection of several “female” sports (such as netball and synchronised swimming) from inclusion in the Olympics roster of participating sports, on the grounds that the sport does not have enough male participants.

This situation is a clear disadvantage for women looking to compete professionally in their chosen sport. Although the IOC have developed this perception towards female participation in some sports, there are signs of movement in the US where the US women’s national soccer team recently won an historic judgement securing equal pay with their male counterparts and a $24 million (£17.66m) payout. 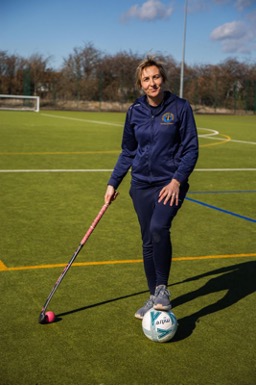 Developing our knowledge of how school life at ASA reflects the participation of women in sport, we have interviewed Cheryl Heath, Head of the ASA PE Department, about her experiences as a woman performing in male-dominated sports. She started her journey in sport in primary school where she played football. However, this branch was cut short and as she grew older, she “became more aware of the gender stereotypes and succumbed to the pressure and stopped playing football.” This is a common point among younger females, arguably, because they are girls, they absorb the damaging perception, as Mrs Heath evidently did, that “girls shouldn’t be playing football.”

Mrs Heath said “From an early age I was fortunate to have female role models, such as my teachers, who shared a passion for sport. This awareness of gender inequality only came as I furthered my study in sport. However, during college only two women out of a class of twenty studied sport. This made me adamant that I would become a role model for the next generation of young women to pursue their passion in sport.”

Cheryl Heath is now Head of PE here at ASA and also plays field hockey in the Women’s Yorkshire League. She continues to pursue this motivating nature, stating she will “promote equality through education, experiences, wisdom of thought and give all students courage to dream.”